Francisco Collado-Rodríguez is Professor of English (American Literature) at the Department of English and German Studies of the University of Zaragoza. He teaches courses on 20th- and 21st- century American literature and on popular culture. He graduated with honors in English at the University of Extremadura, subsequently carrying on his doctoral studies at Extremadura and Edinburgh.

He was president of the Spanish Association for American S 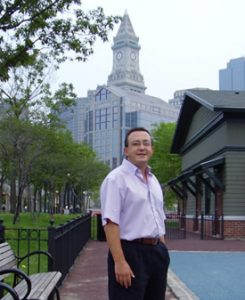 tudies (SAAS) from March 2007 to March 2011. He has been editor of Miscelánea: A Journal of English and American Studies from 1986 to 1990, and since then he is associate editor/reviewer of a number of academic journals.

He has written on the influence of fantasy, myth, and scientific discourse on modernist and postmodernist English and American fiction, as well as on ethics, trauma and literature. He has published essays on novelists Richard Adams, Thomas Pynchon, Bharati Mukherjee, Kurt Vonnegut, E. L. Doctorow, Bobbie Ann Mason, Eric Kraft, Chuck Palahniuk, Jeffrey Eugenides, and Jonathan Safran Foer, among others, as well as on poets T. S. Eliot and Ezra Pound. He has also written books on Richard Adams’s fiction (The Frontiers of Mythmaking: Richard Adams’s Early Fiction, 1994) and Thomas Pynchon (El orden del caos: literatura, política y posthumanidad en la narrativa de Thomas Pynchon, 2004, awarded a National Research Prize by the Spanish Association of Anglo-American Studies). In 2007 he co-edited with Nieves Pascual and Laura Alonso the volume Masculinities, Femininities and the Power of the Hybrid in U.S. Narratives: Essays on Gender Borders. He also co-edited a special issue of Pynchon Notes, with Celia Wallhead in 2008.

Among his publications are  «Minimalism, Post-humanism and the Recovery of History in Bobbie Ann Mason´s Zigzagging Down a Wild Trail,» in The Southern Literary Journal, vol. 39.1 (2006); “Ethics in the Second Degree: Trauma and Dual Narratives in Jonathan Safran Foer’s Everything is Illuminated,” in Journal of Modern Literature, vol. 32.1 (2008): 54-68. “From Science to Terrorism: the Transgressing Function of Energy in Pynchon’s Against the Day” in Against the Grain. Reading Pynchon’s Counternarratives. Pohlman, Sascha, ed. Dialogue 8. (Rodopi. 2010): 323–47.  “Trauma and Storytelling in Cormac McCarthy’s No Country for Old Men and The Road,” in Papers on Language and Literature, vol. 48.1 (2012): 45–69. “Textual Unreliability, Trauma and the Fantastic in Chuck Palahniuk’s Lullaby,” in Studies in the Novel (University of North Texas), vol. 45.4 (Winter 2013): 620–37.  “Meaning Deferral, Jungian Symbolism, and the Quest for V. in Thomas Pynchon’s The Crying of 49,” in Critique: Studies in Contemporary Fiction, vol. 56.3 (2015): 255–69, and «Intratextuality, Trauma, and the Posthuman in Thomas Pynchon’s Bleeding Edge», in Critique 57.3 (2016). In 2013 he edited the volume Chuck Palahniuk: Fight Club, Invisible Monsters, Choke. (Bloomsbury Studies in Contemporary North American Fiction) (London and New York: Bloomsbury, 2013).