María Ferrández  San Miguel is assistant professor at the Department of English and German Studies (School of Education, University of Zaragoza). She graduated in English Studies at the University of Zaragoza in June 2010, receiving the Extraordinary Degree Award “Gregorio García-Arista”. 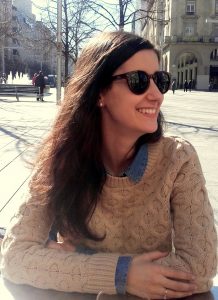 In March 2013 she secured a position as research fellow at the Department of English and German Studies (University of Zaragoza), after being granted a national competitive research fellowship by the Spanish Ministry of Education, Culture and Sport (FPU). In April 2017, she received her PhD cum laude, after defending her thesis entitled «Mapping E.L. Doctorow’s Ethical Pursuit: Trauma and Gender Articulations in Welcome to Hard Times, The Book of Daniel, Ragtime, and City of God» under the supervision of Prof. Francisco Collado-Rodríguez, and for which she obtained the “Félix Martín Award” to the best PhD thesis in American Studies (granted by the Spanish Association for American Studies). María has also been an Academic Visitor at the University of Northampton (2014) and Michigan State University (2016).

María’s main research interests lie in contemporary US fiction and ethics, with special attention to issues of trauma and the posthuman in speculative fiction. Her most recent publications include «Ethics in the Anthropocene: Traumatic Exhaustion and Posthuman Regeneration in N. K. Jemisin’s The Broken Earth Trilogy» (English Studies, in press), «Appropriated Bodies: Trauma, Biopower and the Posthuman in Octavia Butler’s ‘Bloodchild’ and James Tiptree, Jr.’s ‘The Girl Who Was Plugged In’» (Atlantis, 2018), «Towards a Theoretical Approach to the Literature of Resilience: E. L. Doctorow’s Ragtime as a Case Study» (Orbis Litterarum, 2018) and “‘No Redress but Memory’: Holocaust Representation and Memorialization in E.L. Doctorow’s City of God” (Memory Frictions: Conflict, Negotiation, Politics, Palgrave MacMillan, 2017). Her monograph, Trauma, Gender and Ethics in the Works of E.L. Doctorow has just been published by Routledge (Feb. 2020).